That title sounds awfully dramatic, doesn't it? I don't know how else to explain how I feel about all of the celebrity deaths that have happened in 2016. It really does feel like the end of an era to me in many ways.

Now, I know that there isn't some demon named Twenty Sixteen who systematically picked off far too many of my childhood heroes. I'm not (quite) crazy enough to believe that! And sure, every year we have multiple celebrity deaths, but 2016 seemed to have so many.

Not only is it the unusually large number of celebrities who died, it is the ones that did die. Some were truly shocking. 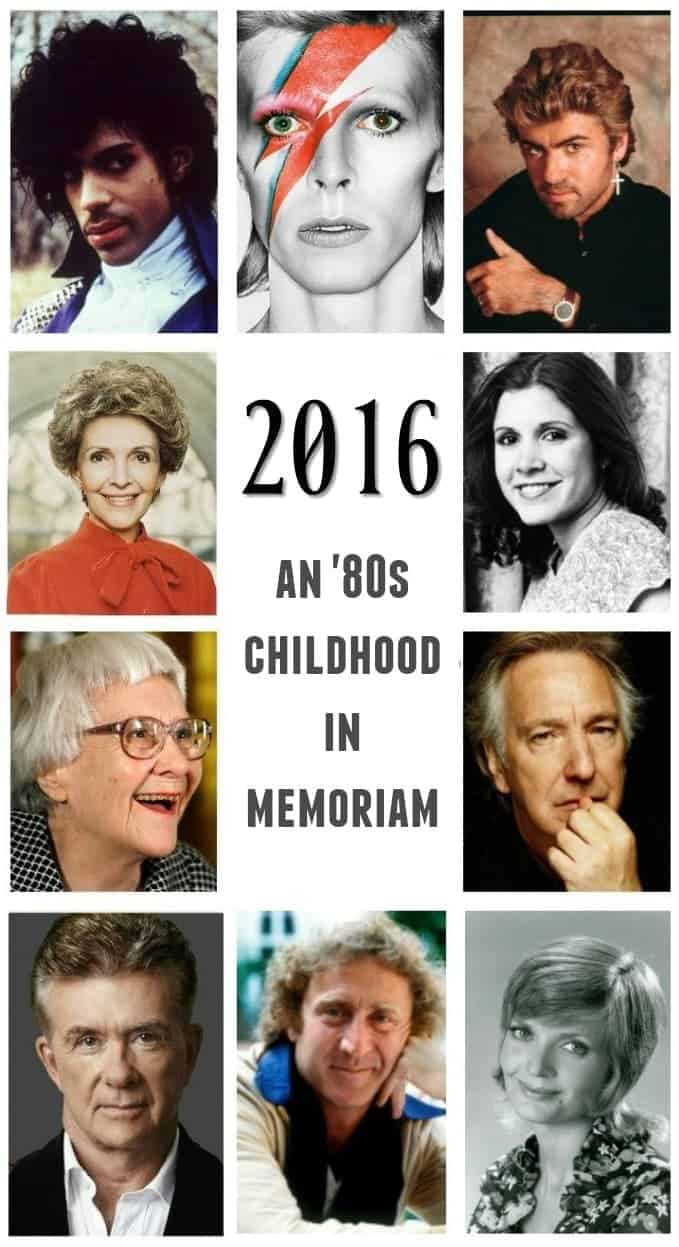 I am an 80s kid so many of the celebrities who died this year were a huge part of my childhood and even my adulthood. So many memories are tied to these people so it has been hard to wrap my head around it all.

This one may have hurt the most. David Bowie was one of my mother's favorites and while I was growing up, his music was a constant in my house. Of course, Ziggy Stardust was the album that was the making of a true music legend, but it was Aladdin Sane that I remember most. I would often sit next to the stereo and just stare at the album cover. There was something about it that captivated me: the makeup, the weird droplet on his shoulder blade, the bright red hair. His music quite literally shaped my own musical taste and for that, I thank him.

Of course, how can we imagine the Harry Potter movie franchise with anyone other than Alan Rickman playing Professor Severus Snape? Before he made us turn to page 394, he was also in several blockbusters from my teen years. Most notably for me, Hans Gruber in Die Hard and the Sheriff of Nottingham in Robin Hood: Prince of Thieves.

As a member of the band The Eagles, Glenn Frey is a legend in his own right. As a kid, I could barely turn on the radio without hearing Hotel California or Take it Easy. He is also credited with singing one of my least favorite songs of the 80s: The Heat is On. I can forgive him for that and instead, I will always remember him more for standing on a corner in Winslow, Arizona.

This one goes waaaaay back to when I was very young. My stepfather used to watch Barney Miller and Abe Vigoda's character Fish was the one that made the biggest impression on me.

Do you remember the 21st night of September? I sure do and I always will. Earth, Wind & Fire may not have been a group that I listened to often, but they were still part of the soundtrack of my childhood. September is a huge song that is still just as popular today. Boogie Wonderland, Shining Star, and Let's Groove. I think we all know these songs and they make you want to get up and dance. Besides, I am secretly a bit of a fan of both disco and Motown so these songs will always make me sing along.

To Kill a Mockingbird. Need I say more? This book is a favorite of so many. Most of us have probably read it as required reading in school or even on our own. It's a classic for a reason and it's a shame that Ms. Lee decided not to write more books after this one. (It's debatable whether or not Go Set a Watchman should have ever been published, but that's a conversation for another time).

Ronald Reagan was president when I was ages 7-15. That's a huge chunk of my childhood so he is the president I remember most. He is also the reason why my first name is often mispronounced. First Lady, Nancy Reagan was also front and center during that time with her Just Say No campaign. Whether I agree with their politics or not is anyone's guess and not important to this particular conversation, but the Reagans were still at the forefront during much of my developmental years. Their administration's policies had an enormous effect on the time, many changes (for good or bad) were made on their watch, and for that, they shaped many of my opinions on politics going forward.

Another who was before my time, but I loved watching The Patty Duke Show in reruns on Nick at Night.

Oh man, this one hurt. When Purple Rain came out I watched it several times, but the soundtrack was IT. I listened to it until the tape wore out and then eventually bought it on CD. He was a musical genius, whether you enjoyed his music or not. He could play just about every instrument and wrote songs for many of our favorite musicians. This one was the biggest shock of 2016 and truth be told, I'm still not sure if I'm over it yet.

Muhammad Ali was an inspiration both in and outside the ring. He broke records and boundaries, and for that, I will thank him for being an American hero.

Many of you may be asking, "Nick, who?" While I don't write about music, I am a bit of a metalhead. Okay, a lot of a metalhead and have been since I was 13 years old. Starting in 1990, Nick Menza was the drummer for the band Megadeth for the recording of Rust in Peace, which is considered by many, my husband included, to be their magnum opus. He was in the band until 1998 and again in 2004 and 2014. Nick Menza died on stage of heart failure while playing with his band OHM in Los Angeles.

You may not know who Kenny Baker was if you saw him. That is because he was the man in the R2D2 suit for the Star Wars movies. R2D2 has always been one of my favorite Star Wars characters and the man in the suit who brought him to life will be missed.

Two of my favorite movies of all time star Gene Wilder: Young Frankenstein and Willy Wonka and the Chocolate Factory. I will always remember and admire him for his comedic roles and for being an all-around cool dude. In fact, one of our cars gets its name from the movie Young Frankenstein. Our blue Santa Fe's name is Frau Blüe Car. Neeeiiiggghhh!

Mrs. Brady. When 2016 took Mrs. Brady I was so bummed out. I spent many, many hours watching The Brady Bunch as a kid. They were on in reruns on a nearly continuous loop it seemed like. I have seen every single episode more than once. Way more than once! The Brady Bunch and Carol Brady will always live on as one of the biggest parts of my childhood. Television-wise, anyway.

I was a pre-teen when Growing Pains started and like most other kids my age, I loved it. I watched every week for the first few years so the character of Jason Seaver was a big part of my childhood. This death was also very surprising to me since Alan Thicke seemed like a fit, healthy guy and not very old.

While Zsa Zsa Gabor wasn't really actively working anymore during my childhood, she was still a mainstay either in the news or the late night talk show circuit. She was a funny woman with a dry wit and I always enjoyed watching her and listening to her stories. She lived a long life of 99 years and made her mark the whole time. 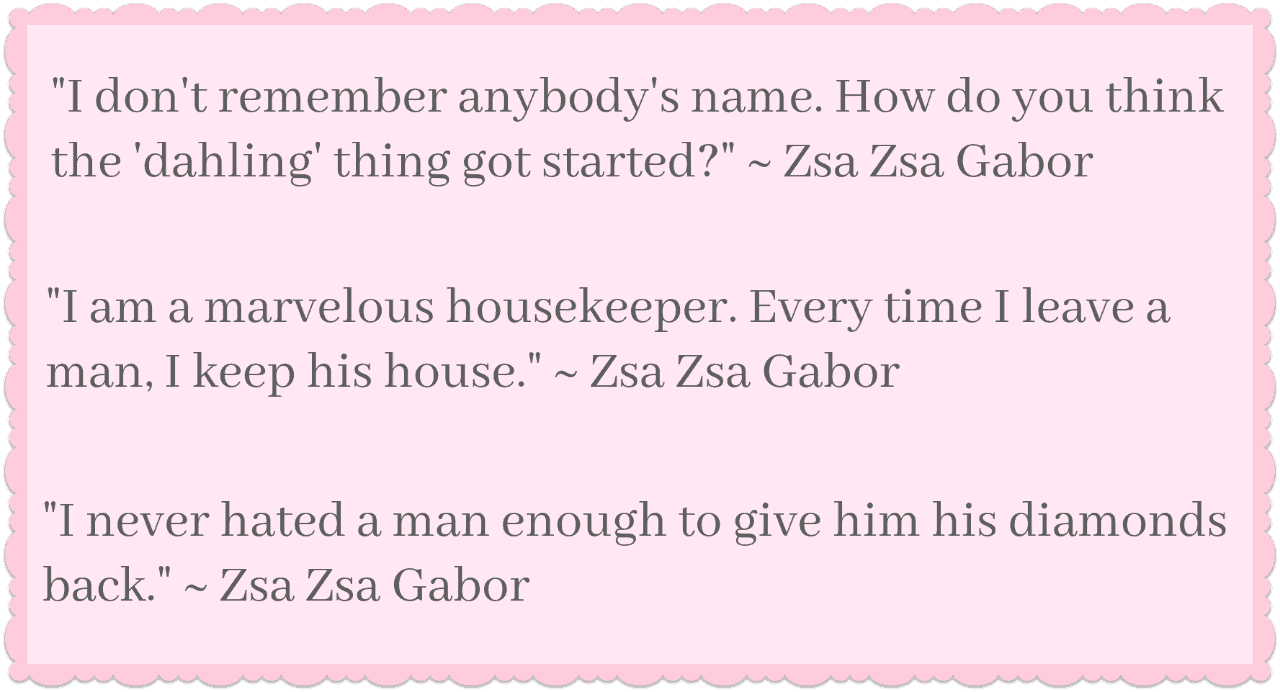 After Prince, this was the next was the most shocking death for me this year. George Michael? What?! I admit that I was never much of a fan of his music, but I have many memories tied to his music. The first was back in 6th or 7th grade I had to do a group jazz dance for a gym show and it was to the song Wake Me Up Before You Go Go. It's funny how often I think of that at random.

I admit it, I am a Star Wars nerd and have been since the early 80s. Carrie Fisher's Princess Leia has been one of my heroes for as long as I can remember. Not only did I enjoy her performance in Star Wars, she was also one of my favorites in The Blues Brothers. Carrie Fisher will always be remembered as Leia, but she was also an accomplished author and screenwriter; not to mention an incredibly funny person. The Force will always be with you, Carrie.

This one. Oh, my heart. This has to be the most heartbreaking death of 2016. Debbie Reynolds literally died of a broken heart after losing Carrie Fisher. So sad, and yet I can completely get it. I don't know what I would do if I lost a child. Now they are together again in the universe in some way. Rest in peace, Debbie and Carrie.

This has been the year that many celebrities, old and young have passed away. While the following didn't have as great an impact on my childhood, they will always be remembered as pioneers in their field, whether it was music, the big screen, politics, or science. These people have made an impact on our world that is here to stay.

May you also rest in peace Vanity, Keith Emerson, Merle Haggard, Chyna, Anton Yelchin, Fidel Castro, Greg Lake, John Glenn, and everyone else who has passed this year.