Home » 5 Times I Survived My Vintage Childhood
This post may contain affiliate and/or referral links. Please see my disclosure page for more information. 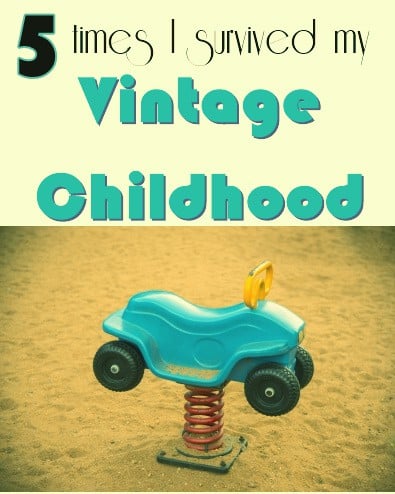 5 Times I Survived My Vintage Childhood

Some may say that I grew up in a different time, that kids are more at risk now than they were in the ’70s and ’80s. I beg to differ. I think kids were just as at risk then as we are now with the only real difference being that we hear about it more in our 24 hour news cycle society.

I really don’t believe that there are more bad people in 2015 than there were in 1980 but the modern times have certainly changed my overall parenting philosophy and has made me watch my kids like a hawk. Not because I think a stranger is going to come steal them away from me, but because I think the sanctimommy sitting next to me might by way of a phone call to CPS if I dare read a book while my child plays on the slide. This isn’t something that my mother ever had to worry about and I have to admit that I’m kind of envious.

I have fond memories of my childhood, playing outside with the other neighborhood kids without a care in the world. I guess it’s natural to wax nostalgic about our own childhoods regardless of when they were but I remember coming out of a small independent toy store when I was about eight and I said to my mother, “this is the best time to be a kid”. I believed it then and I believe it now. It was fun and free then and we managed to survive it with only a few bumps and bruises along the way. There are admittedly a few times that I was luckier to survive my childhood than most, though.

That time I ate wild mushrooms off a log.

When I was probably four or five I had a friend who lived two houses down and we would play in each other’s yards every day. In her yard was an old wood pile that had mushrooms growing on it. In all of our four or five-year-old wisdom, we thought that it would be a fantastic idea to eat them. Why not? What could go wrong? Oh, not much. All I remember is making it to the house in between ours before collapsing on their lawn so sick that I couldn’t move. My mom came running out and we went to the ER for some epicac. I still remember how horrid that stuff tastes. Moral of the story: only eat mushrooms that come from the grocery store or better yet, none at all. I still will not touch mushrooms to this day. 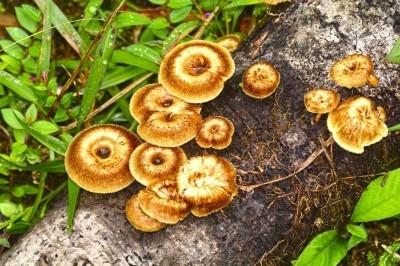 That time I went flying down the hill on a bike.

I may have been a little older for this stunt, about five or six. I don’t even know whose bike I was on, but it wasn’t mine because at the time I didn’t know how to ride one. Since I didn’t know how to ride a bike I thought it would be the perfect time to learn . . . on a hill . . . on a narrow dead-end street with a busier street at the bottom. Fan-freaking-tastic idea! I went flying down the hill not knowing how to use the brakes but that’s okay, my house broke my momentum. I have no idea how I didn’t hurt myself other than the fact that I’m obviously superhuman.

Those times I played outside until the street lights came on.

Either by myself or with friends, this was a regular occurrence. This was the easiest way for kids to tell time in my ‘hood. We didn’t have cell phones and I was a grade school kid who didn’t wear a watch. We lived in a place where being outside relatively unattended wasn’t a big deal and the street lights were our cue to go home. For the record, this is the ‘hood where I grew up. I grew up in a small Connecticut borough; a small fishing village with narrow (mostly) one way streets where cars can’t drive fast, the roads weren’t busy, and the houses were close together. It was a small borough where someone always knew someone else. Shockingly by today’s standards, none of us ever went missing.

Those times I jumped off the top of the slide.

When I was a kid we didn’t have the slides that are at playgrounds today, we had stand-alone slides instead of one attached to a huge structure. I was fortunate enough to have the playground a couple of blocks away from my house down by the fishing docks so I went down there all by myself with my friends, no adult (gasp) and they had an old slide with stairs and a platform on top. We had fun and did crazy things like jump off the top all the time. You know, kid things. We managed to never break a bone or knock ourselves unconscious either. 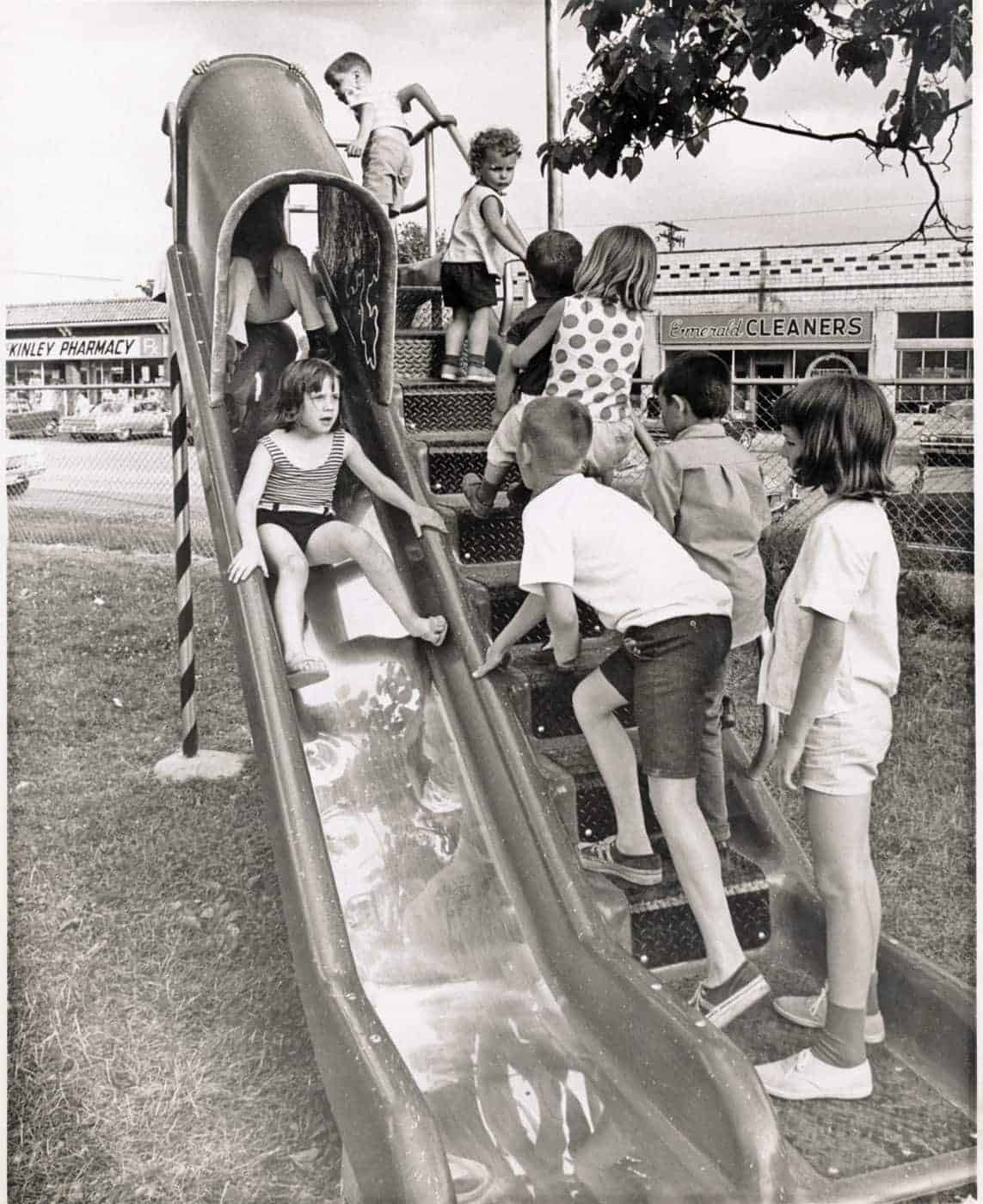 That time I tried to go hitchhiking.

Yeah, I admit that was pretty stupid on my part. I was spending the day at my BFF’s house as I often did. They were (and are) family friends so my mother was also there catching up with her BFF while mine and I went outside to play. We got the wise idea to go to the road and stick our thumb out, not knowing what we were doing because back then you would see hitchhikers on the road all the time. Even though our mothers could see us from the kitchen window if they looked, back then moms socialized with each other over a cup of coffee instead of helicoptering over their kids.

I’m not going to say that bad things never happened to kids then, but a lot of amazing things did, too. Amazing learning experiences that many kids are missing today because we were social and went outside to play, grow, explore our world, and even make mistakes. The best lessons learned are through the mistakes we’ve made. Plus they make for really great stories.

Can You Fix or Reseal Delaminated Cloth Diapers in the Dryer?

God, I like you Regan! I love how you write and I love the name of your blog. I am certainly a anti June Cleaver ( The Beav and Wally would be horrified) and without a doubt a anti Martha Washington kind of person. It is just astounding how much has changed since we grew up. I lived on a hill with a busy road at the end. I lost my brakes on my bike one day going down that hill! I survived! I also could not stop my skateboard on that same hill. I survived! I hitchhiked from Marlboro, MA to Marshfield, MA to see my Dad. My parents had just split up and he was upset and sad on the phone with me, so I just stuck out my thumb to go see him. Very stupid thing to do, but, I survived!! I was just a hoola hooping, hopscotching, pogo stick jumping, skateboard riding ( no helmet, oh my!) Van Halen loving, crazy and free girl from the Seventies and it was the best time of my life!

Thank you so much.

I’m sad that my kids are living a far more solitary childhood than I did. I was always playing with someone because we just went outside. Now people schedule playdates and it’s such a hassle. The seventies and early eighties were definitely the best time to be a kid. I will always believe that 🙂