This is a non-sponsored review of a book from my personal collection. This post contains affiliate links. 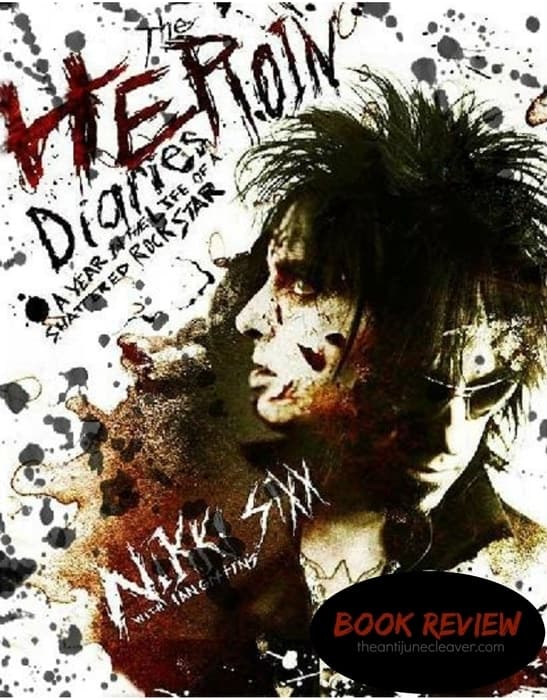 I know that I’m going to be dating myself here, but as a kid who grew up in the 1980s, I was a huge Motley Crue fan. Huge! Their Theater of Pain album was the first one that I bought with my own money when I was about twelve. My best friend and I used to sit on the railroad bridge with our little boom box radio and sing every word to every song. For years after that, they were my absolute favorite, almost the point of obsession. Even now, whenever I hear the song Louder Than Hell I am instantly transported back in time to the railroad bridge.

Even though it took me a while to get to it, when The Heroin Diaries came out I knew that I had to read it from both a fan standpoint and because I am genuinely interested in the human condition. In both respects, The Heroin Diaries didn’t disappoint.

Nikki Sixx’s diaries chronicle his downward spiral with his addictions to heroin, cocaine, alcohol, and his out of control co-dependent relationship with Vanity. Yes, that Vanity. Written in 1987 during the writing, recording, and touring of the Girls, Girls, Girls album, it’s a wonder that Nikki survived much less was able to record an album and support it on the road. From the sound of it, he accomplished this just barely.

Fun fact: I was at the show in Providence, Rhode Island which makes an appearance in the book. The show was about a month after I turned fourteen and as a birthday present I went with my best friend and her older brother and a friend of his. That was cool for me to read.

Nikki wasn’t the only out of control rock star at the time by any means. The whole band was drinking to excess, doing drugs, and many other forms of debauchery, but Nikki was the one who took it way too far. It’s a wonder how he even survived. I found myself cringing through many parts of the book, yet I was so engrossed that I had to keep reading.

The diaries give a fascinating and personal look at the mind of someone who is in the throes of a debilitating addiction. While interesting it’s also sad and upsetting at times. It leads up to the night that he died for two minutes after his infamous heroin overdose and how he eventually turned his life around, but not without a few more bumps along the way.

Even if you’re not a Motley Crue and/or Nikki Sixx fan, many people will still find this book interesting. I highly recommend it to just about anyone. To say that I enjoyed it might not be the right term since reading about someone’s addiction isn’t enjoyable but I found it to be a very good read.

If you’d like to read this book, and I highly recommend that you do, it can be found on Amazon and Barnes & Noble and well as other online and local booksellers.

Tomato and Cucumber Salad with Mint: My Favorite Summer Grilling Side Dish

I loved reading this book and am still a Crue fan and have always been a fan of Nikki. Now I am also a fan of Sixx:A.M. Their first album, the Heroin Diaries, correlates with the book which I highly recommend!

Sixx A.M. is pretty good. I like the songs I’ve heard on the radio but I haven’t heard the whole album.

I’m older than you in that I was 24 when Girls, Girls, Girls was release and it was awesome. I’ve always loved rock music and so remember the first time I heard a Motley Crue album in 1983. I read this book a few years ago and, yes, so sad but intriguing at the same time. I remember being really impressed with his level of honesty and truthfulness. Also, the deep ability to look inside himself. 🙂

One of the things I like most about him is that he’s intelligent. I’ve always thought so but this book made it even more apparent.

I agree. Not only his intelligence but how he turned his life around and all that he has accomplished. I think it is wonderful that he has his charity, Running Wild in the Night, which helps runaways and kids on the street. It’s nice to see someone giving back.