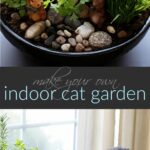 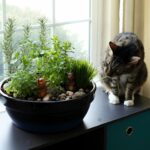 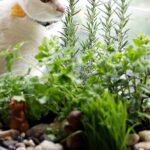 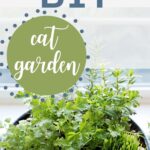 Our two cats, Orion and Pete are more than pets in our house; they're furry little family members. They were both shelter cats who had been declawed by their previous owners, which means that they can't go outside under any circumstances. Since they are strictly indoor cats, I got the idea to bring the outdoors in to them by making them an indoor cat garden.

With their own garden, they now get to smell, chew on, and rub against plants; something they have been unable to do until now. But it is important to be aware of which are cat-safe plants and which aren't.

Many plants can be toxic to cats so not all are suitable to use for a project like this. If you have a cat then you know that they are mischievous critters and if they're not supposed to get into it, the more tempting it is. Just like my kids.

Putting your DIY cat garden together

For my cat garden, I picked up the obvious cat grass (wheatgrass), fresh catnip, and catnip seed pods as well as some less obvious choices; rosemary, parsley, and mint.

After filling my pot with dirt, I took the plants out of their small pots and played with the placement of them until I was happy then planted them my big pot.

*Note: Don't confuse Italian or curly parsley with spring parsley which is toxic to cats. Parsley in large doses could give your cat a bellyache so if your cats are eating too much of it, remove it and make some spaghetti sauce instead.

I found a low sided flower pot that my cats can't knock over and had enough surface area for me to get creative with plant placement as well as some decorative elements to make my indoor cat garden a more welcome addition to my home.

To my plants, I added some rocks and some garden figurines. The rocks were from my yard along with some smaller decorative rocks I had in a vase. The figurines were in the garden section at Walmart and they have stakes in them so the cats can't knock them over. Aren't they cute?

I planted the catnip seed pods in a separate pot so it didn't get too crowded. They go right on top of the dirt and if kept moist, they will sprout in about a week. I know Orion and Pete are going to love having more fresh catnip to munch on. If I'm lucky I might even get a cuddle of thanks or two out of them.

This is Pete. Pete likes to eat plants. Pete is the reason that I made this cat garden after he ate some of my Valentine's Day flowers. Harumpf. It's a good thing he's funny and gives good cuddles because he doesn't always think things through.

Thankfully he didn't get sick! Some common houseplants and flowers that are toxic to cats are lilies, philodendron, aloe, begonia, and poinsettia to name a few. It is best practice to check if a particular plant is toxic to your cats before bringing it home or put it in a hanging planter that your cats can't get to.

This is Orion. He is more inquisitive and investigates while Pete is more of an all-in kind of guy. Orion is an incredibly picky cat who barely eats cat food, much less a plant. Instead, he prefers to sniff and rub against the plants.

But that plant is on the ASPCA's toxic plant list

Before making this cat garden I did a lot of reading on plants that are safe for cats. I considered several different sources including the Pet Poison Helpline, the ASPCA toxic and non-toxic plants list, and several other websites.

I have found that the ASPCA site tends to err on the side of caution more than the others which is good but also may make some people nervous. Because of this, you will have to use your own judgment on which plants to choose for your garden.

A poison control for cats fridge magnet is always a good idea to have around.

For example, I used mint and parsley in my garden. Both of these plants are listed as toxic to cats in large quantities on the ASPCA website but aren't listed at all on the Pet Poison Helpline.

Since catnip is in the mint family, I determined that my cats would not ingest enough of it to cause vomiting. The signs of toxicity in parsley are sunburn and dermatitis if ingested in large quantities so I wasn't worried about this with my cats either.

If using these two herbs makes you nervous since they do appear on the ASPCA's list, you may substitute them with another plant that is listed on the non-toxic list. Some of those options include basil and cilantro, or you could use a flowering plant like the African violet.

This is your cat's garden and there aren't many rules.

Unfortunately, gnats in plants are a fairly common thing. If you see what looks like fruit flies hovering around your plants, don't panic. It can be easily treated with a natural insecticide that won't harm your kitties.

Why do I have gnats in my potted plants?

This happens when your soil is too moist. If you have gnats in your houseplants you will probably also see a white fungus on your soil.

How to get rid of gnats in plants naturally

There are several pet-safe ways to get rid of gnats in plants naturally. But, as always, read the bottle thoroughly before applying any insecticide or homemade remedy to your plants that will come in contact with your cats.

*This post was originally written in March 2016 and has been updated.

173287shares
Previous Post: « What to Put in Cream of Wheat to Make it Un-Boring
Next Post: The 30 Cutest Valentine Paper Crafts for Kids »