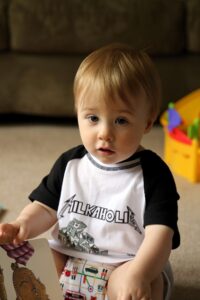 See this sweet boy’s shirt? Well we are on Day 5 of night weaning and he’s not pleased. Okay, maybe I’m being a little dramatic. I have to admit that overall it’s going better than I thought that it would in some ways, but let me tell you a little about sweet baby K. He is a very headstrong little boy and he LOVES to nurse. He is a Milkaholic, just as his shirt says.

Now I don’t mind still nursing, but his 19th monthday is tomorrow and he’s still getting up 1-4 times a night and dagnabbit, I’m tired! My husband, bless him, is more than willing to get up and comfort him but my very headstrong milkaholic flips out when The Husband goes up there at night. Screaming, flailing, and doing “The Rod”. There have been nights when The Husband has been trying to comfort him for a half hour or more just to let me sleep {warm fuzzies}, but it can’t stay like this. So enter my attempts at night weaning.

Night One: Awesome! A piece of cake, I thought. He woke up at 11:30, he fussed for a minute or two but nothing too dramatic and was asleep in 5 minutes. Bliss! Why didn’t I do this sooner??

Night Two: Not quite as awesome, but not awful. He fussed a bit more and stiffened up some but was back to sleep within 10 minutes. Not bad, still wondering why I hadn’t done this sooner.

Night Three: All hell breaks loose!! K-Dub is NOT happy at all! He was The Rod, The Twister, and The Noodler all at once if that’s even possible! Screaming, carrying on, having a tantrum of epic proportions and stiffening up so much that I was afraid he might launch himself right off my lap and onto the floor. This went on for a while and there was no consoling him so, for his safety, I put him in the crib. The Husband then went up and had the same experience so I brought him a cup of water. K drank it like he just came back from the Sahara and then The Husband was able to get him to sleep. (K really needs to start saying more than hi and buh-bye)

Nights Four and Five: Not as dramatic as Night Three, but not as smooth as the other two. Stiffening tantrum, refusing water, but was asleep in about 10-15 minutes.

I think we’re making progress overall but hoo-doggy is this kid a spitfire! Gotta love him though ♥

This post is part of the Manic Mommy Monday blog hop hosted by The Gnome’s Mom.

I See Me! My Very Happy Birthday Book Review

Just reda your post & was wondering how the night weaning went. How many days after this post did it take until your son was fully night weaned? Did the weaning hel him sleep through the night?

It did take a couple of weeks and while he didn’t sleep through the night until around his second birthday, he did wake up less and getting him back to sleep was relatively easy.

Yikes! I am glad my little guy sleeps through the night:-) Hopefully it will be like a pyramid and it will get better each night!

I want to night wean, but the scenarios you described above are what I dread. My little guy is 15 months and still nurses multiple times a night…I have a feeling it will not be pleasant.

I haven’t started night weaning yet. My son is so dependent on his night feeding, I’m afraid he’s not going to take it well.

Thankfully, my 21 month daughter usually only wakes up once and if my husband goes to her, she’ll be happy, but if I see her, she’ll THROW a fit because I have “milkies” which is what she wants.

I just posted my manic mommy link about night weaning to lol. I give you lots of credit making it 19 months. Mine is less than 7 mos and I am ready to be done with this night waking. The biggest reason though is that she has to share a room with her big sister which makes it even more challenging.. Good luck!!

I remember night weaning my first son. I think it was about 9 or 10 months. One thing I clearly remember is offering a cup of water, that almost immediately after the first sip got thrown at me. I’m almost at that point with GEM, but I’m holding out in hopes that he night weans himself 🙂 I can dream, right?