Home » The 10 Most Annoying Children’s TV Characters {According to Me}
This post may contain affiliate and/or referral links. Please see my disclosure page for more information.
Uncategorized

The 10 Most Annoying Children’s TV Characters {According to Me}

I’m not sure why people who make television programming feel like so many of the characters have to be obnoxious, yet there’s always that one. There often seems to be at least one in every program that is like nails on a chalkboard.

Maybe I have more of a fondness for the shows that I watched when I was a kid or the fact of seeing them through the eyes of a child that make them less annoying, but it seems like the shows that my kids watch don’t have a shortage of them.

So without further adieu…

I don’t mind Spongebob so much in all honesty. I’m kind of over it after my older son’s obsession with it a while back but I find it kind of amusing. Except for the laugh. Spongebob’s laugh is enough to make me want to stick hot pokers in my ears to make it stop.

Yo Gabba Gabba also isn’t too bad either in comparison to some of the other little kids’ shows out there. But their voices. The high-pitched Tootie and then Foofa. Foofa sounds like she found some magic mushrooms with her trippy-dippy way of speaking.

Then there’s Brobee. I know he’s only supposed to be about 3 but my very-soon-to-be-3-year-old sounds far more intelligent than Brobee does.

Worst children’s show recast ever. Both of my kids love Blue’s Clues, but ONLY the ones with Steve. They won’t even watch the Joe episodes.

Girlfriend couldn’t find water if she fell out of a boat.

I don’t know what it is about Abby that bugs me. Part of it is her voice but I think a lot of it has to do with her participation in the downfall of Sesame Street.

We barely watch Sesame Street anymore unless it’s Sesame Street Classics on Netflix. Before the days of Elmo and Abby, when Big Bird was the man and Bert and Ernie actually had a part in the show that they helped make famous beyond an occasional, lame claymation skit. What’s that all about, anyway? 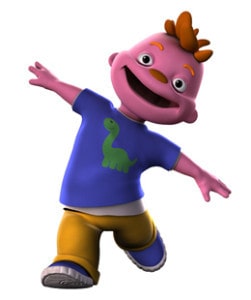 I guess it’s not Gerald’s fault that he isn’t the sharpest knife in the drawer, but I have a feeling that he’s going to grow up to be an obnoxious drunk. He’s already loud with a purple face. 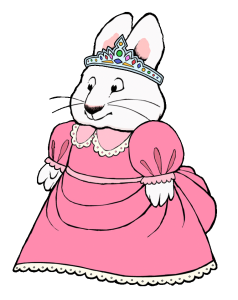 Oh, Ruby. If you were my older sister I would throw a shoe at you. That’s all.

I have to ask, where in the world are Max and Ruby’s parents?? Maybe if her parents were more involved then she wouldn’t be so bossy and annoying.

The word ‘Caillou’ is clearly French for whine. Red saw this show a few times when he was little (10 years ago) and it was quickly banned from my house. I don’t think K even knows that Caillou exists and it’s better that way.

He’s a whiney brat and that isn’t the kind of behavior that I want my kids to emulate. When my kids act up I often remember the meme that says, “When I get annoyed I remember that it could be worse. I could be Caillou’s mom”. True story.

You knew this was coming. He may love me, but I don’t love him.

This is another one from Red’s youth that has been banned from my house ever since. He used to watch Barney at daycare and loved the silly purple dinosaur. He could have books or stuffed animals in the house but nothing that spoke.

By the way, why are the kids on Barney’s show about 10? No ten-year-old I know plays with a sappy make-believe purple dinosaur. Just sayin’.

Do you agree with this list? What character do you find the most annoying? (either on this list or one of your own)

When Did Halloween Become Taboo?

Getting rid of our television was the best parenting decision made on our household. We have a netflix account and will watch the occasional show, but it’s not normal. There are so many other more interesting and productive ways to fill time and keep children occupied.

As I scrolled down I knew that Barney would top the list, lol.

Still, my older son LOVES him! I don’t get it.

LOL! My oldest who is now almost 14 loved him too. My little one barely knows he exists. It comes on here after a show he watched before we starting watching Mr. Rogers on Netflix and he would stare for the 30 seconds it took for me to change the channel. I just can’t.

So funny! I used to think the same exact thing about Ruby!! I wanted Max to JUST SAY NO. 😛

You could not be more on point with this list lol. My daughter is only 3 months so she is not watching tv yet. (well she watches what we watch lol) I dread the day she starts wanting to watch a show with any of these characters.

Thankfully, my son isn’t old enough to watch TV yet, but I completely agree with this list and that Barney is #1.
I loved Thomas growing up but now that I’ve seen it a couple times recently he is obnoxious!!

I am glad my son loves Mickey Mouse! Although I was a huge Barney fan so I have some old school movies that I make him watch. lol

I am actually dreading my baby to get to this age when TV will be part of entertainment, just because i cannot stand the different characters for the children show. i hope we can find a good show for her!

We watch a lot of Sesame Street Classics and Mr Rogers on Netflix or Amazon Prime.

I completely agree with most of these but there is one that doesn’t make the list…. Thomas the train! That entire show drives me crazy because clearly Thomas is often made to feel horrible with any little mistake and I hate the line “I was not a useful engine”.I don’t want my children to learn if they didn’t do something just right that they are not useful.

Thomas was a runner up as well as Prince Tuesday from Mr. Rogers

I definitely agree with Barney being #1. I watched him enough with kids I babysat to learn how annoying he is. I have been avoiding introducing my daughter to him for fear she will love him and start requesting him all the time!

Too true! I avoid it by not having the TV on during the day, but when pop-pop is watching D, Spongebob Squarepants goes on (ugh!) and when dad is home there is some type of children’s show put on the TV (it must be a guy thing b/c we do alright without it during the week)!

We’ve been watching Mr. Rogers on Amazon Prime along with Sesame Classics. He loves them both and there is a minimum of annoying characters.

Hahaha. I guess if some kids saw this, they would disagree with you. But me, I agree with you! I dislike Dora the most. I think she’s ugly even if she dresses like a princess.lol

This list is perfect. I couldn’t agree more with all of the characters that I know of. Whenever I hear Barney’s theme song coming from my phone when my daughter turns on Netflix, I cringe! I hate him. Love this list 🙂