×
Home » When Do Electronics Become a Problem for Your Kids?
0shares 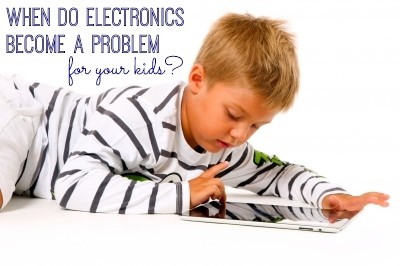 I'm not about to get all preachy on whether or not your child should play with your iPad regularly or better yet, have their own. I do, however, want to share with you a cautionary tale and you can take it for whatever you think it's worth.

A little back story: my son, Red, is fifteen years old. Up until the age of eight he spent every other weekend and Tuesday evenings with his biological donor. On his visits he would pretty much only watch movies, play video games, play on the computer, and eat junk food. Sounds like a kid's dream, right? Sure! He was in hog heaven and while I didn't like it at the time there wasn't anything I could do about it. This set the stage for years and years of trouble.

I am going to preface this by saying that I am not anti-video games or anti-electronics but I am also not my child's friend. It's my job to ensure that he becomes a productive, well-rounded human being. He played video games at my house within reason while I monitored his video game usage closely and thought that I had done a pretty good job but the wheels of addiction had already been set in motion.

For his twelfth birthday we finally decided that it would be nice for him to have a cell phone. Allow him some freedom and the ability to stay home alone for short periods since I haven't had a landline phone in over a decade. That kind of thing. He got an older model Android to test the waters with and see how he handled it and at first he did pretty well but there also weren't many bells and whistles that could get him into trouble. A year later we upgraded that phone to another Android with more options and that's when all hell broke loose . . .

He now had access to better apps and with that he started sneaking the phone up to his room so he could stay up all night playing games and looking at boobies. When I say all night, I mean all night. He started to miss assignments, was getting poor grades, his attitude sucked, and he looked like death warmed over. The phone was taken away for a while. When he got it back the same thing happened so he lost the phone again indefinitely. During this time I forgot to lock it up one night when I needed to use it after my phone broke and I was waiting for a replacement. He snuck it back up to his room and was huddled under his blankets like a junkie trying to get a fix. I then took the phone and smashed it on the driveway. Yup, I sure did!

It doesn't begin and end with just the cell phone though. Because of various infractions he has also had his Nintendo DS taken away and I sold it on eBay and his Kindle (yes, the plain old black & white Kindle became a problem, too) is hiding in my room under lock and key. He has also lost video game privileges for sneaking on the Wii and PS3 without permission and computer privileges for continually going to game sites that locked up my laptop and loaded it with spyware despite being told numerous times that free gaming sites weren't allowed on my laptop because of the spyware. He has also brought a borrowed Nintendo DS and (working!) cell phone into the house that he borrowed from friends and we knew almost immediately that he had some sort of electronic device on his person somewhere based solely on his change in demeanor.

I am now very seriously considering therapy because I'm legitimately worried that he won't be able to function in a college environment or eventually hold a job when I am no longer there to monitor his electronics usage. Because of my ongoing troubles dealing with this with my teenager I urge you to use caution when it comes to how much and at what age you introduce your kids to electronics. Electronics addiction is very real and should be treated as the problem that it is. If you are also dealing with this with your teens or even with yourself or someone else you love, there is help. Find a counselor who is well-versed in addiction therapy and if it's that bad you may be able to find a treatment center that handles these kinds of addictions.

Handling it at home: