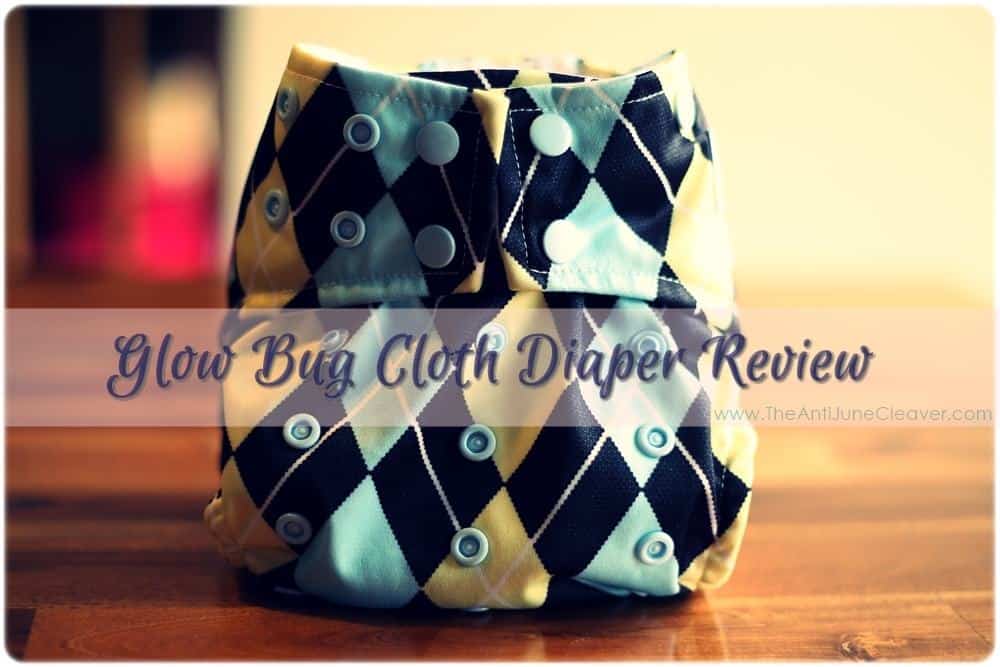 I was given a complimentary product to facilitate this review. This post contains an affiliate link.

I tried Glow Bug cloth diapers about a year and a half ago but have heard that they had made some changes a while back. When I was given the opportunity to review one I couldn’t wait to see the changes in action.

I wish I still had my first Glow Bug for comparison purposes but I did get some help from a few fellow bloggers who have reviewed the old version.

Glow Bug cloth diapers have three sets of rise snaps for a more versatile fit. This diaper will adjust to four sizes instead of the usual three. There are also two sets of crossover waist snaps. 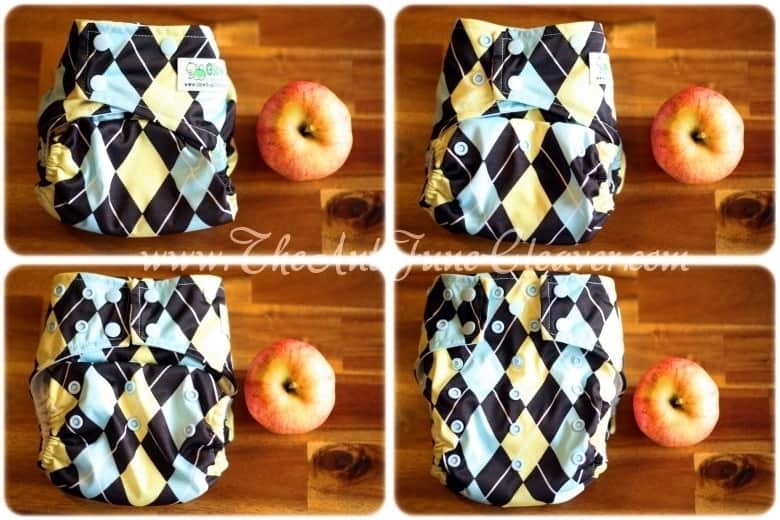 One of my favorite things about Glow Bug diapers is their wide variety of adorable prints. I didn’t get the choose the print that I was sent but it is the one that I most likely would have chosen. I love argyle diapers.

On the outside the new style doesn’t look much different that the old style. My Cloth Diaper Stash has some nice photos of the older style Glow Bug diaper and they look very similar.

The inside of the Glow Bug has always had internal gussets as you can see in this review from Mommy’s Favorite Things, but now they have what they call 360 gussets. The idea behind the 360 gusset is to minimize the chance of leaking out of the legs or blowouts up the back.

It also comes with two full-sized microfiber inserts which is great for those of us with heavier wetters. 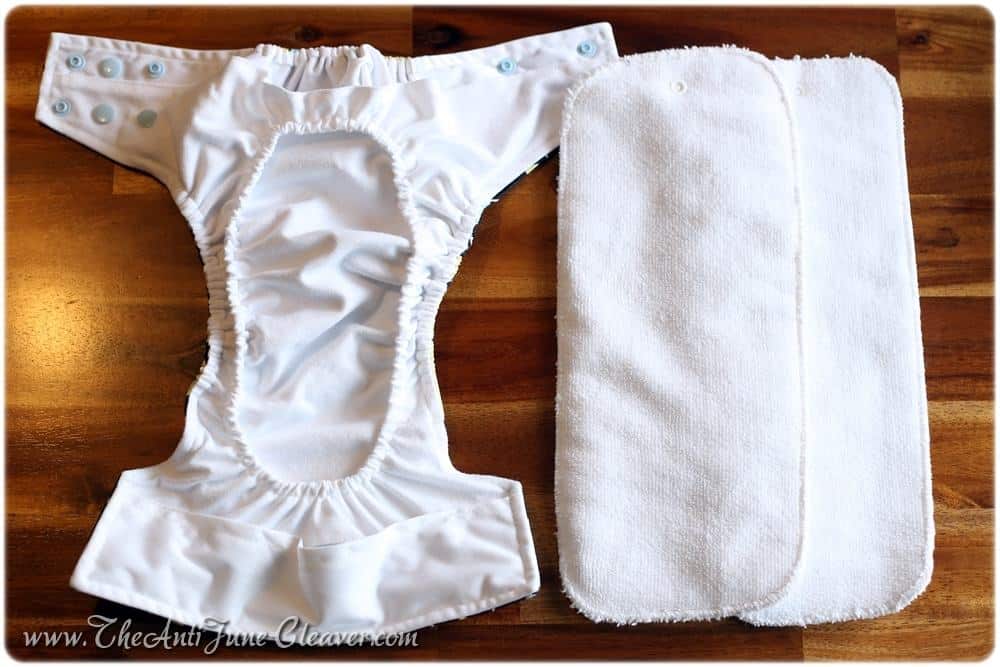 There is a sleeve style opening so you don’t have to unstuff the diaper before washing. If you choose, there is a snap on the front flap so you can snap the insert into place. The openings have flaps of PUL on them to cover up the inserts so you won’t have to worry about microfiber touching your baby’s bare skin, which can potentially cause irritation and rashes.

Where are Glow Bug Cloth Diapers made?

​Glow Bug Cloth Diapers are proudly made in China.  How can we say this?  Our diapers are made in our own facility, by our employees who are paid fair wages, who work in good conditions and who are extremely skilled resulting in a high quality product that is ethically made.

Ms. Shen and Ms. Han lead our sewing teams, Ms. Bao and Ms. Xu are in charge of the snap work, and Mr. Liu and his team make sure all the fabrics are cut. Our amazing production manager Hillary Ling makes sure all our teams work seamlessly together to create your Glow Bug Cloth Diapers.

The first thing that I noticed is that the newer version of the Glow Bug is of better quality than the older one. The fabric feels more sturdy, the suedecloth inner is thicker and isn’t as pilly after washing, and the tabs fit flatter and I got a better fit overall in the front. As you can see in this review from Our Piece of Earth, the front tabs now have a smoother fit. 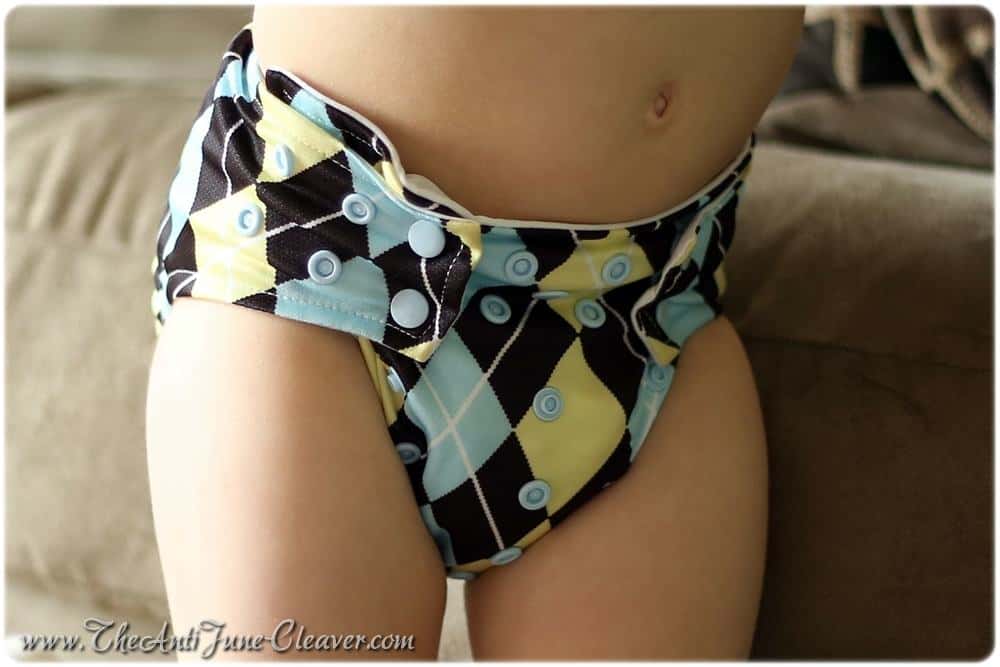 The front flap does come out a little on active toddler, but the flap used to come all the way out all the time on the older version and back then K was far less active than he is now. To me this is the biggest improvement. (I have had a few diapers with a front flap like this and all of them have come out at least a little bit) 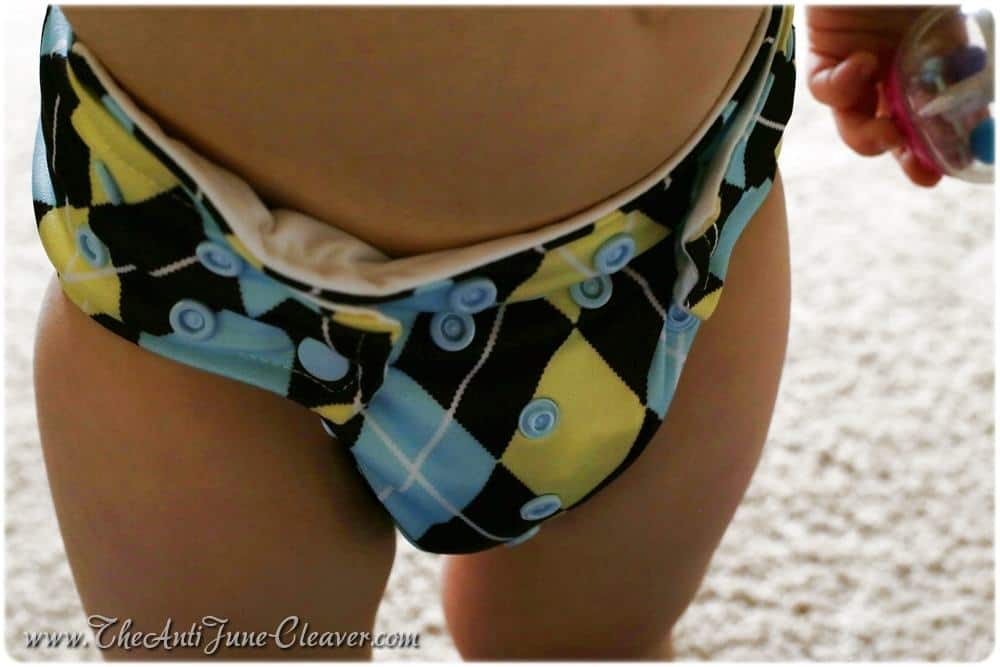 With two inserts the front of the diaper has an expected amount of bulk but it didn’t bother K at all. 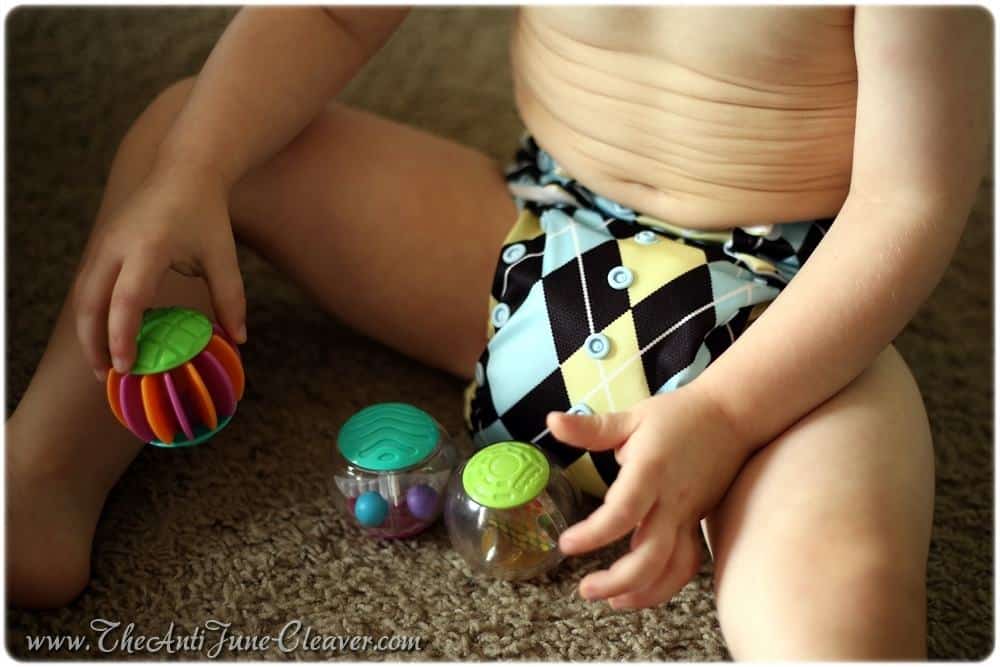 The leg elastics are nice and snug to catch any messes that the 360 gussets might miss. 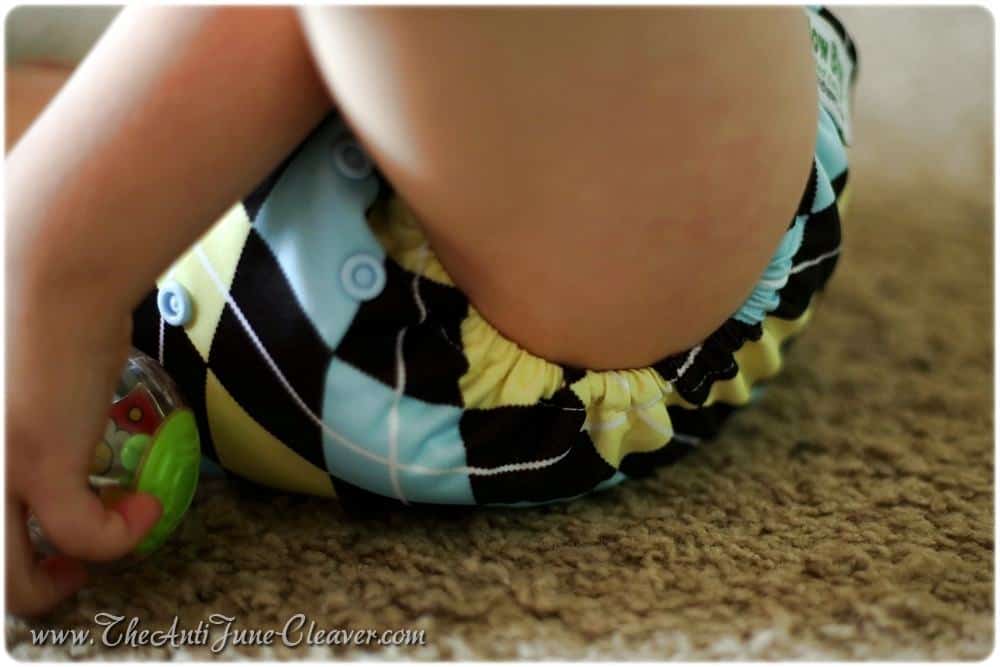 We got a nice fit overall. Since we need to use two inserts this diaper is a little on the thick side (although I do have bulkier ones) but would be pretty trim if you only need one insert. I don’t have any problem fitting pants and jeans over this diaper though. 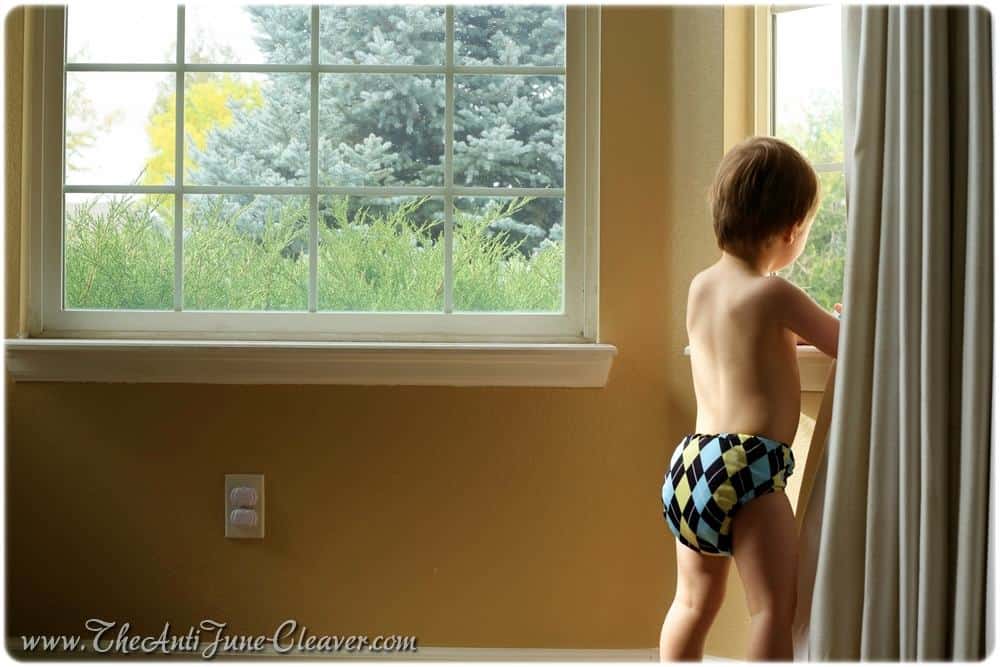 I like this version better than the older one and would recommend them to people who wish to build a stash on a budget. If you have an older one and thought that maybe it wasn’t for you, you may want to give this one a try.

We didn’t have any leaks with the inclusion of two inserts and the 360 gussets were tested and performed their job beautifully. Spraying poo out of gussets is kind of a pain but you need to decide which is more important: easier cleaning or less chance of blowouts. Even at 3-years-old (tomorrow) my son still rarely has a solid poo that can be dumped and flushed easily so the gussets work well for us.

I love all of the print choices that Glow Bug has to offer and they’re really affordable, too. For the price you really can’t beat them.

My one wish would be for Glow Bug to sell individual diapers, but if you need to start or pad a stash they are a nice option. You can buy packages of twelve diapers for just $150.00. That’s just $12.50 per diaper and for that price, these really are very nice. If you don’t need twelve, you can order six for $70.00. You may purchase directly from Glow Bug or you can purchase locally from several direct sellers.

I received one or more of the products mentioned above at no cost to me in order to facilitate this review. 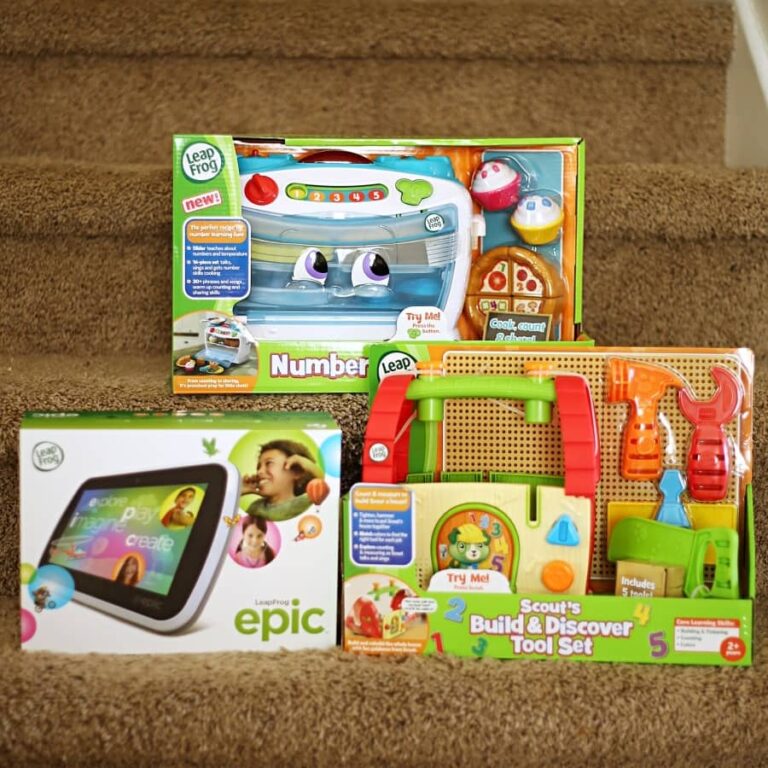 I received complimentary products as part of the LeapFrog Mom Squad ambassador program in exchange for promotion and my honest reviews. This post contains affiliate links.  The holidays will be here before you know it. There are so many great toys to choose from for the little ones and it may be hard to choose…

I was given the opportunity to review a KidTeez t-shirt and am thrilled to be able to be giving away two to one lucky winner. I chose the More Cowbell t-shirt because the joke never gets old in my life.

I received a complimentary product to facilitate this review On this Halloween Eve I am excited to tell you about CostumeExpress.com. It’s a little late for this year’s costume but it is definitely a site that you should keep in mind for next year. I was given the opportunity to review a costume and I… 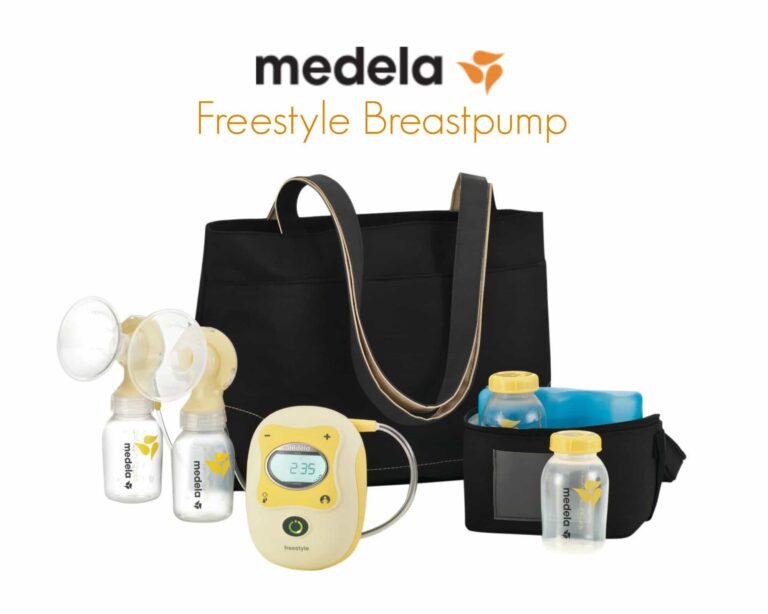 My Medela breast pump was a life saver when Dub was a baby. He has always been high needs and as an infant he didn’t allow my husband or I to sleep very much and certainly not at the same time. Since we were on very different sleeping schedules I had to pump a lot…

Erin, the founder of Thirsties, started the company with nothing more than a sewing machine and $100 five years ago. Now Thirsties is one of the leaders in the cloth diaper industry! Thirsties is a continually growing company committed to greener parenting and eco-friendly, 100% American made products. All of Thirsties’ diapers are made by…

Most of my friends are done having kids so I haven’t officially converted anyone to cloth yet. I have created interest with two people who have yet to have children though. Our babysitter and my husband’s sister-in-law, who is currently pregnant, so we’ll see. How do I create interest? 1. I make sure to use my…