×
Home » What to Do if You Wash a Disposable Diaper
977shares 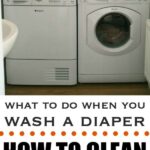 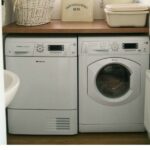 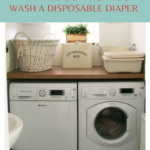 We just got back from our road trip to Santa Fe and, of course, there was a ton of laundry to be done. One of the first things I did when we got settled back in was to throw a load of laundry in the machine.

There were a few things in there already, so I added our vacation laundry to the few things that I threw in there before we left. This included the pair of pajamas that Dub was wearing the night before we left for the weekend.

I get the load going and don't think anything more of it until the rinse cycle. I went to the laundry room which is also a bathroom and since our machine has a glass top I happened to look in to see how things were going. That's when I saw that I had washed a nighttime pull up that was never thrown away before Dub threw his pajamas in the laundry pile.

I love that the little man was being helpful with the laundry, but you've got to be kidding me! The last thing I ever thought I would do is accidentally wash a disposable diaper since I'm usually a cloth mom. Besides, who washes a diaper?! From what I've read, plenty of people and now I know how easily it can happen.

Related post: How to Identify Different Types of Diaper Rash

The beads from the inside of the diaper were all over the clothes and the washing machine. What a mess! I also may have sworn when I realized how big of a mess this was. I may have sworn a few times, even. Maybe. I won't confirm or deny it. (I did).

After my initial panic, I sprung into action to get this mess cleaned up. Of course, as most of us do these days, I turned to Professor Google to help me out. As usual, he came to the rescue.

How to clean disposable diaper gel beads from your washing machine:

First of all, if you do wash a disposable diaper, don't panic! Really, it's easier to clean than it seems like it will be. Trust me.Pull the diaper out as soon as you see it then complete your wash cycle.

Put the clothes in the dryer, shaking out every item as well as possible before putting it in.

Dry as normal. The beads will either disintegrate or end up in your lint filter.

Wipe as many of the beads out of the washing machine as possible with a damp paper towel. Don't worry about getting everything. I have a top loader and I'm short so I was only able to get the biggest clumps out.

Run a wash load with as much water as possible, detergent, and salt. I used the bulky setting, a cup of detergent, and 1/4 cup of sea salt. The salt may not be necessary, but I saw someone suggest it so I tried it.

That's it! My machine was clean after this step, but I ran a clean cycle with Affresh afterward just to be on the safe side.

With one wash, my laundry and my machine were good as new again. I don't plan on having this accident ever again (who does?), but if I ever do I know not to panic. While it's messy and looks like an absolute nightmare to clean, it's actually quite easy.