Are you sick of me singing the praises of RagaBabe yet? Seriously, you'd think that I was on their payroll. I swear that I'm not but am excited to show you some real numbers based on several recent Paypal receipts so that I can show you that I'm really not crazy.

When I first heard of RagaBabe I looked on their site and my eyes popped out of my head over their price. There was NO WAY that I was going to spend over $30 on a diaper. Are you kidding me?! But then I finally bit the bullet and bought a used Newspaper print 2-Step and the addiction started. When I found the Buy/Sell/Trade board on Facebook I saw what people were getting for their used Rags and I decided that I could talk myself into continuing to buy them because of their resale value.  I was officially sold when I sat down and crunched the numbers and found that I was cloth diapering almost for free by using RagaBabes and was spending more money (in the long run) on other diapers.

There is a high start up cost with Rags for sure. I won't dispute that for a second, but if you can start early, ideally during pregnancy, the sticker shock may not sting as much.

Now for the proof. I did a cost comparison of ten diapers that I recently sold. Five were RagaBabes and five were popular commercial diapers. I intentionally added a Rag in not-so-great shape that I purchased used and I was still able to sell for a good amount of money. This way you can see that even if you don't keep your diapers in perfect shape you can still end up with more money in return.

In the end, five RagaBabes ended up costing $7.75 and five commercial diapers cost me $59.88. These are real numbers, folks. 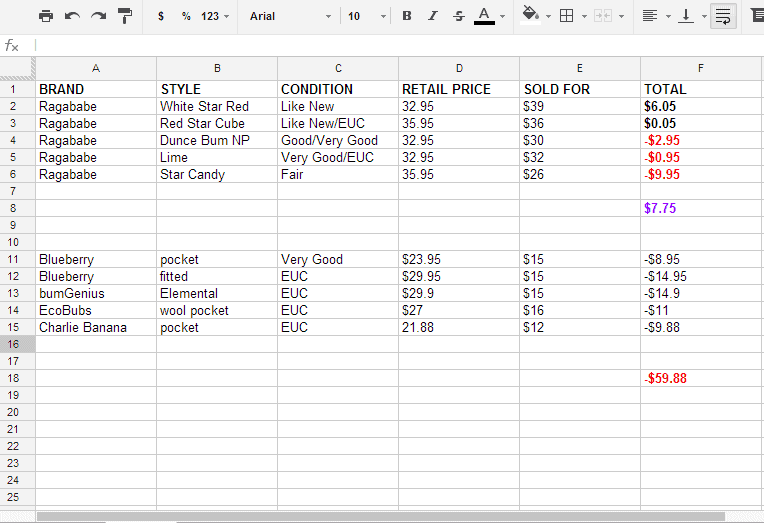 You could even get paid to diaper with Rags depending on the print/color, diaper condition, and market conditions. These particular diapers were purchased and sold on the RagaBabe BST page on Facebook which allows for a max price of retail plus shipping two ways (original shipping from RagaBabe and then shipping to the buyer) but there are places where selling over retail is allowed and people are buying them.

Please note that I do not support scalping Rags for one second, and if you get caught you could get banned from buying them directly from RagaBabe.