First, I would like to take a moment to introduce you to Carly. She has taken over reviewing cloth diapers and baby and maternity products on the blog for me. Carly is the mother of an adorable little girl and is due to have her second baby in July, so I hope that there will be many opportunities for her to review some great products for the little ones. So, without further ado, here is Carly’s first review of the Imse Vimse swim diaper. 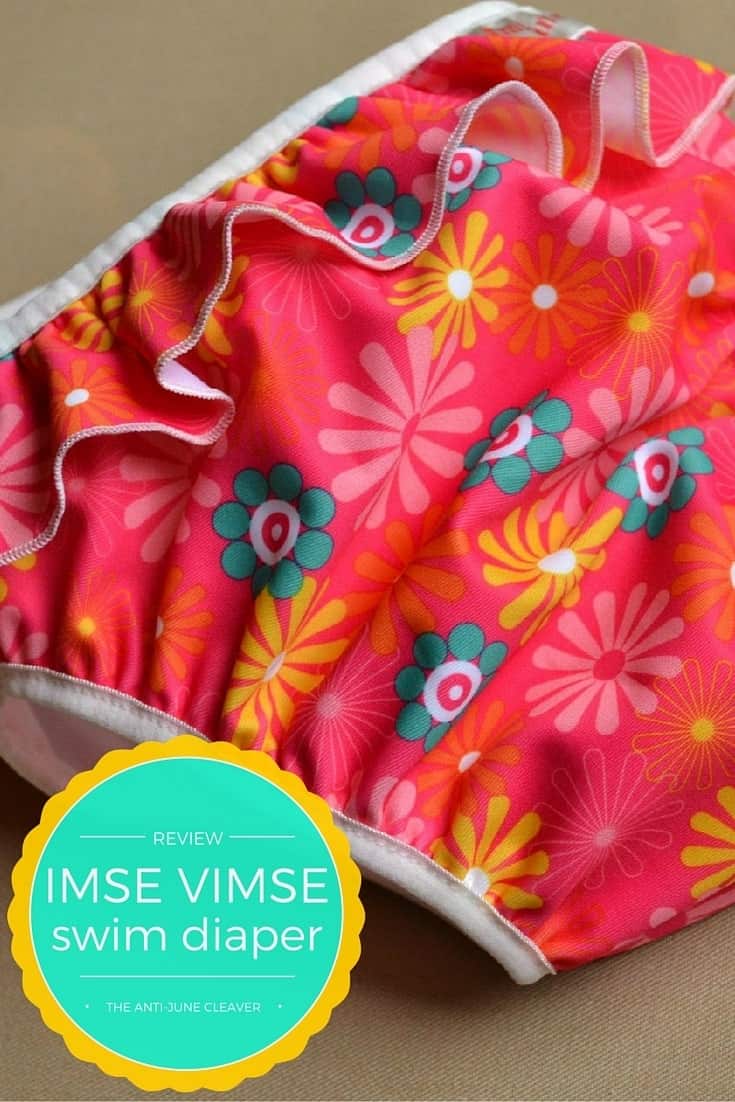 For over a year now, I have been using a damaged one-size pocket diaper for my daughter’s swim lessons and while this is sufficient for a time, nothing can compete with the real thing. So when the opportunity arose for me to try the Imse Vimse swim diaper, I couldn’t contain my excitement to finally have my hands on an actual diaper meant for the pool. 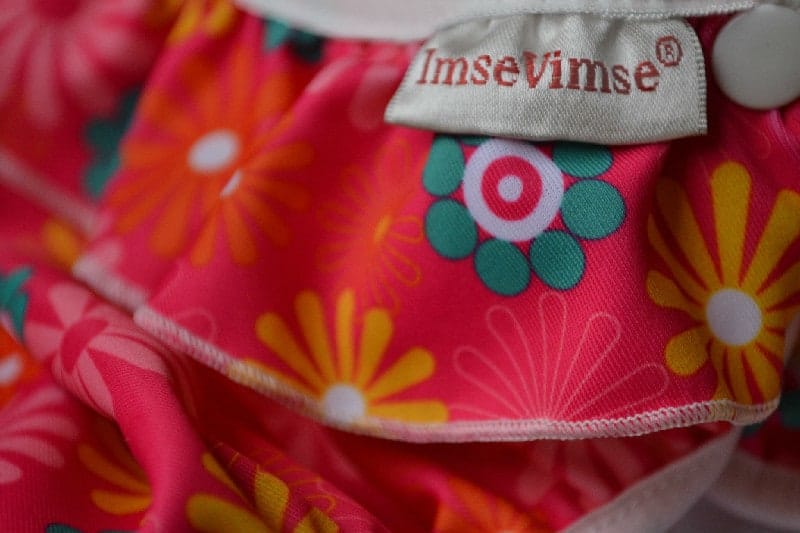 When I first received the diaper (a mere three business days later), my first impression was that it was the most adorable thing I had ever had to put on my girl’s sweet little bum. Oh, the frills and flowers! They were perfectly suited for her princess attitude. Don’t worry if you have a little mister – there are prints that are gender-neutral and designed for boys (without frills!) as well.

Then I grew a little concerned, thinking that I had overestimated the size of my daughter and that I had ordered a size too big. I asked for the largest size that they had, which fits 28-35 lbs. Since she is on the precipice of being too large for the size down (24-32 lbs), but on the small side for the largest, I went with my gut. After holding the diaper up against her fluff-butt, I decided that it would work just fine. Hey, a little extra room means room to grow, right?

As her weekly swim lesson approached, I was so excited to try out her new diaper! I tucked it gently into our bag along with her swimsuit (a requirement for all little girls in her class) and upon slipping it on, I was delighted to find that it fit just right. The elastics hugged her legs and waist gently, enough to hold in any unwarranted surprises and to still have room for her to grow into some more. 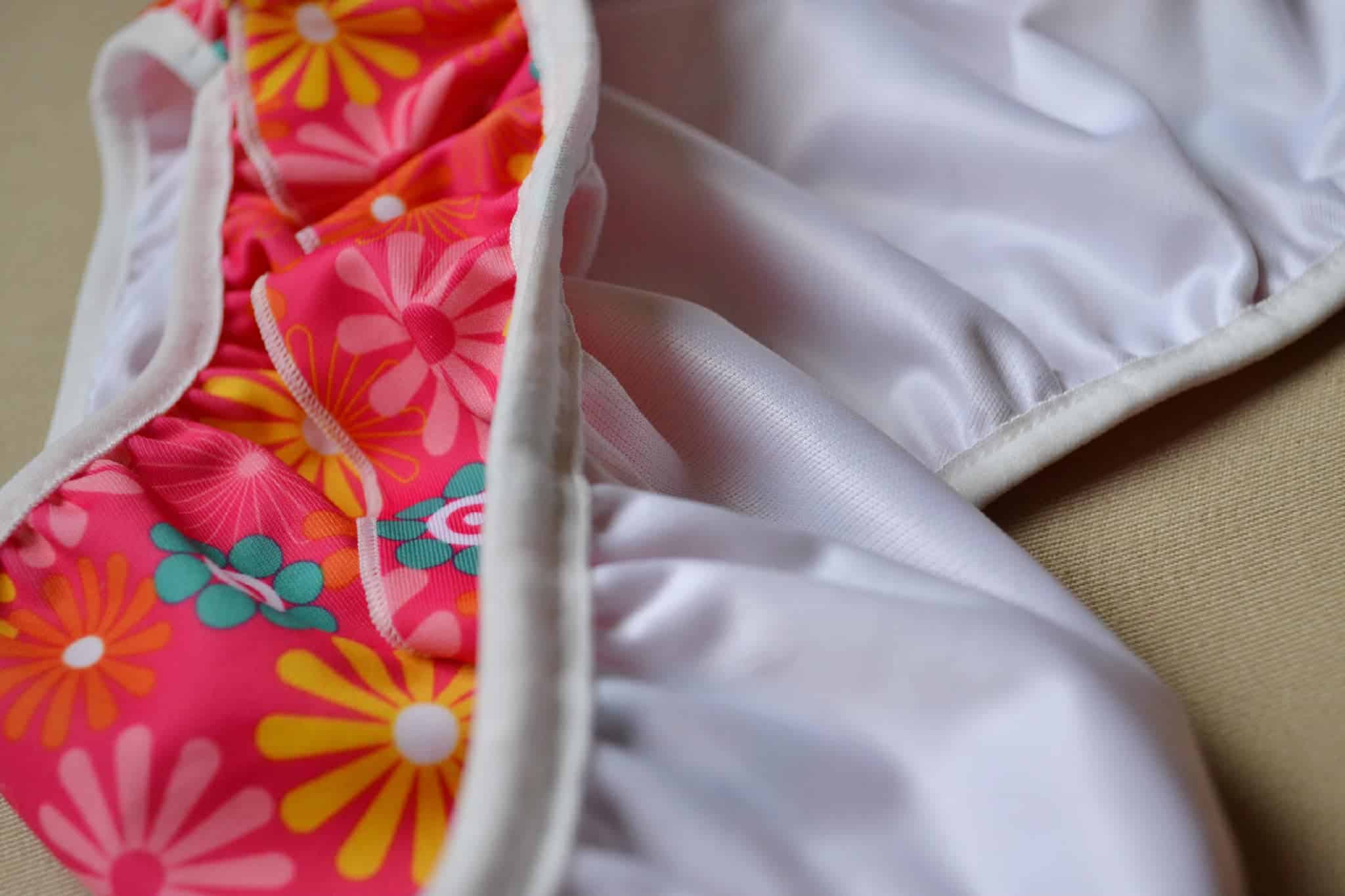 The thinness of the diaper makes putting on a swimsuit over it easy and the frills are perfectly placed to still show. Although we were lucky enough to escape our time at the pool without needing to test the material’s durability against poop, there was never a moment that I feared for the water’s cleanliness. I knew the diaper would hold up its end of the bargain by keeping everything unsanitary locked within. It is important to note, however, that since there is no padding, this diaper is best to be put on directly before entering the water as it will not soak up any pee.

My favorite part of this swim diaper are the two snaps on the left hip. It could use snaps on the other side as well, but that’s me being nit-picky. Unlike a lot of swim diapers that you could find in a department store, I didn’t have to pull this all the way down her legs. I wouldn’t want to deal with the mess that would have ensued if she did have an accident. In fact, the snaps were so handy, I was able to whip the diaper off one-handed in the shower! 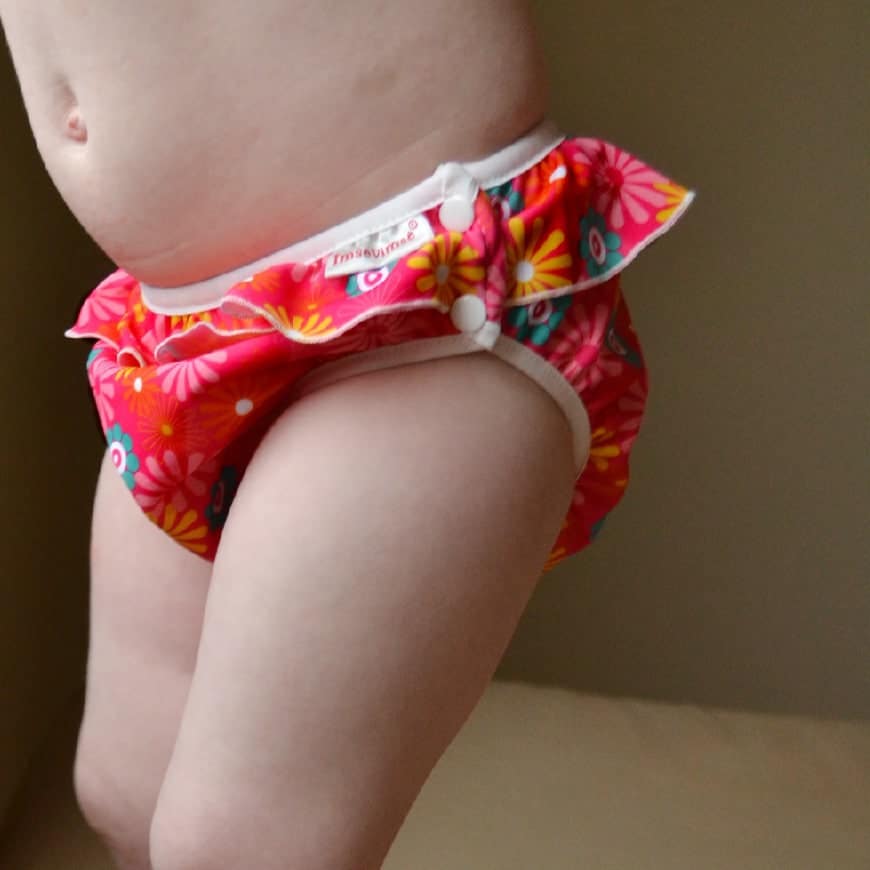 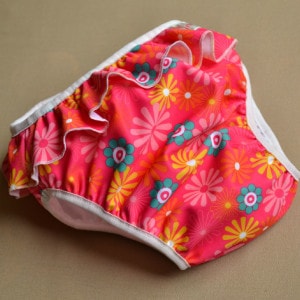 Post-swim, care for this swim diaper is just the same as any other cloth diaper that we own. I gave it a good rinse in the shower at the pool, then tossed it into the pail to be done with everything else.

The best part is that these are easy to find! Look for them at Nicki’s Diapers, and Amazon. 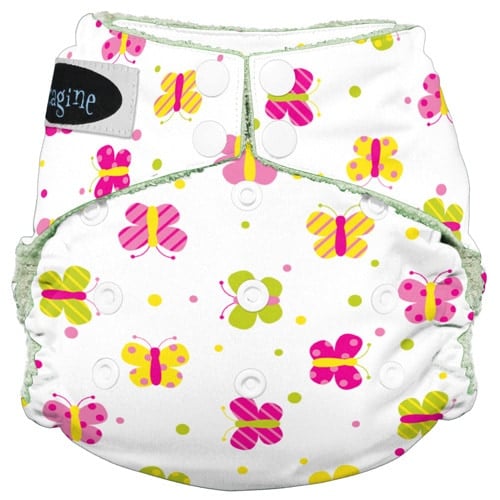 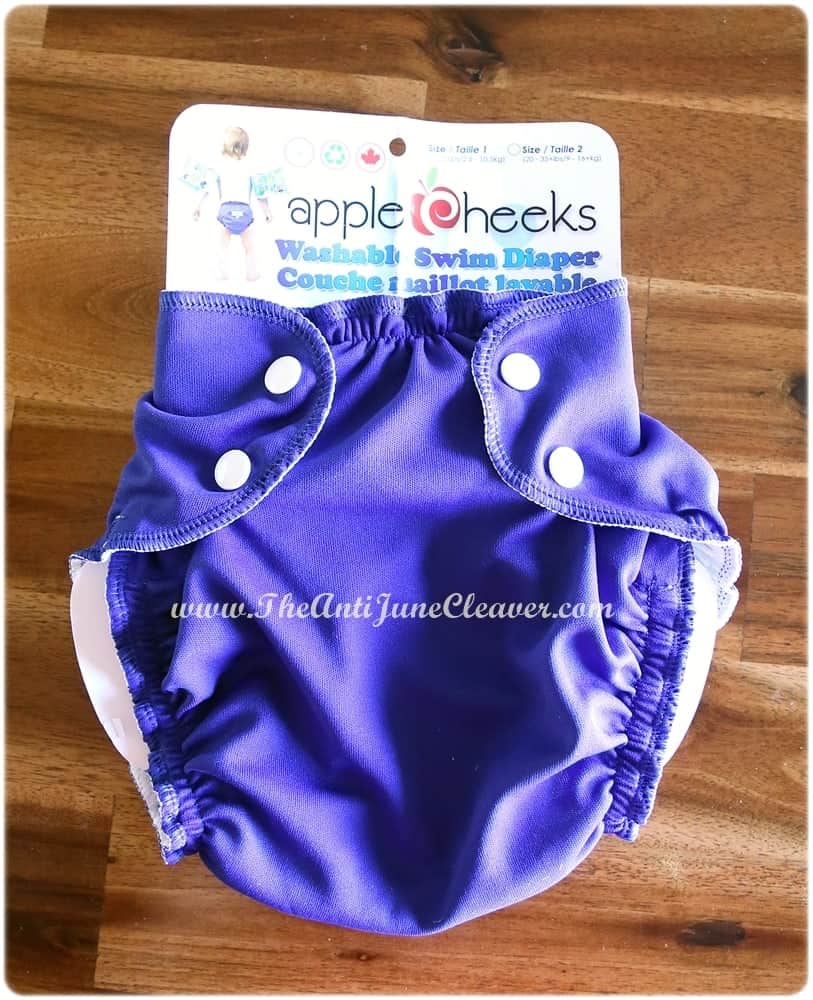 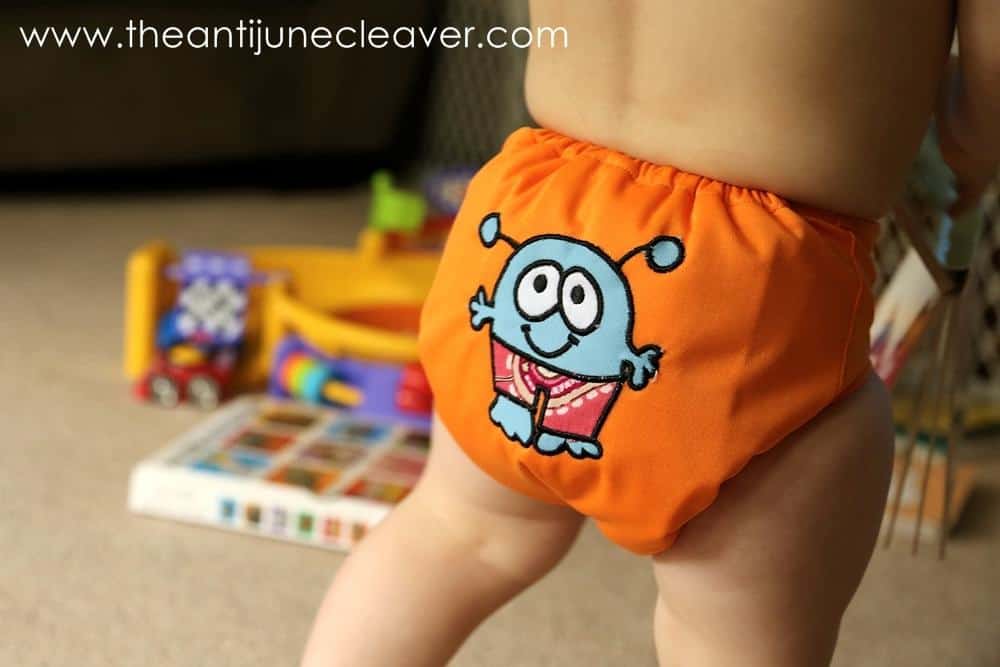 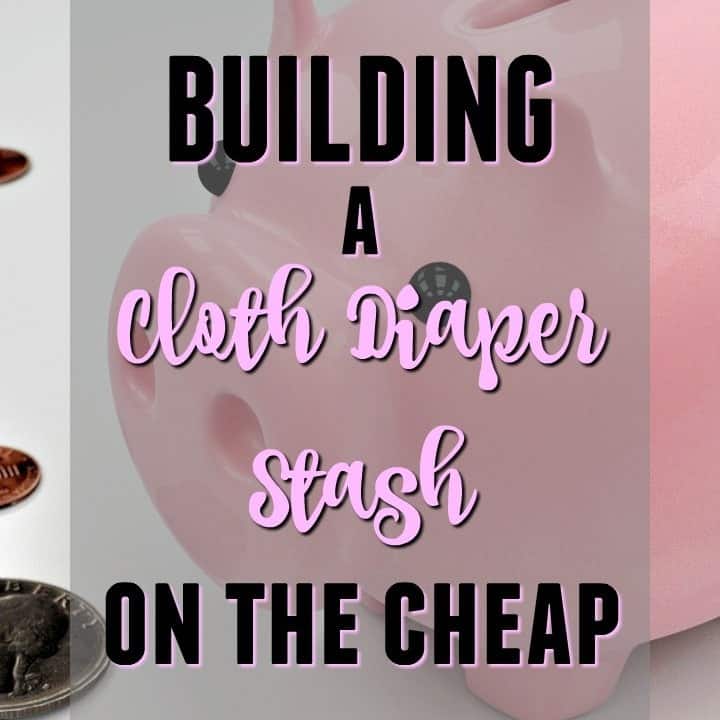